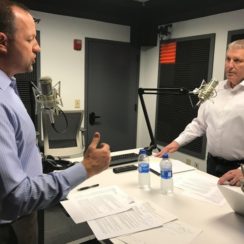 Your performance has been recognized by the senior team and you’ve just been promoted to a first line manager or leader. You’re the boss. Now, what? In the second episode of our Executive Leadership podcast, John Maxwell Company’s Perry Holley and Chris Goede will navigate Level 1 of the 5 Levels of Leadership with an action plan for moving on to Level 2 as quickly as you can.

Listen to all podcasts in this series and subscribe to new episodes on iTunes– or Google Play.

Read the transcript below:

Today’s episode is titled “Congratulations, Now Get Busy.” What does that mean? As it often happens, your great performance is recognized by the senior team, and you’re invited to become a first line manager or leader. Perry in your experience, I know you’ve probably seen that a lot in sales roles, right? The biggest sales producer often says, “Hey, now you’re the sales manager. You’re the sales leader.” Well, it’s not always the best situation, but sometimes it’s great because it means that someone saw leadership potential in you and now you’ve been given the manager title or the role, the responsibility.

Welcome to the lowest Level of Leadership – Level 1 of the 5 Levels of Leadership. Now it’s time to get busy moving out of Level 1 as quickly as you can. Now I remember telling my wife, “I got promoted, I’m now the boss,” and she said “At work.” I said “right.” Well, remind us if you wouldn’t mind on the Five Levels. Just run that through that real quick. So, this is a methodology that John developed almost 20 years ago and it started in the book “Developing the Leader Within You.” He just re-released that book and that chapter stays the same even though he changed 83% of that book after he dug into it. And the methodology is very simple. Think of it as a ladder as I’ll explain it to you, but it actually applies more than just kind of a stepping stone.

Level 1 is that you have influenced. We define leadership as influence at the John Maxwell Company and at Level 1, people follow you because they have to. Because you have that title. Like you said, you’re the boss. Level 2 influences. People follow you because they want to. It’s about relationships. It’s about the ability to connect with those that you lead. Level 3 is about production. This is where you build your credibility as a leader, so people are looking at you and you have influence with them because of what you have done for the organization. So they say “Man, Perry is killing it. He’s producing. I want to be on his team. I want to be part of what he is doing.” Level 4, this is probably the biggest gap that I see in corporate America, and it’s about reproduction. It is where people follow you because of what you’ve done for them – investing in them, mentoring them, coaching them, developing them, not just training them. We’ll talk about that in another session. And, then Level 5 is kind of the pinnacle and John says, “This is where people will follow you because of of what you have done for them and the organization over time.”

An example of that: John talks about it in the book is coach John Wooden. For him, he personally mentored him. It’s one of those situations where no matter what’s going on right now, you’re listening to this podcast. If your phone rang or you got a text from someone that has invested in you over time for so long and had done it so well, you’d stop the podcast right now and you’d pick up that call and you would do whatever you need to do to connect with them. So, that’s the levels. The great thing about it is that Level 1 and Level 5 are given to you. All of the work is done. Levels 2, 3, and 4 are improving and growing your influence.

So, I am a fantastic salesman. I get promoted. I’m now the boss of the salesman that pushed me at Level 1. That’s pretty good news. I got promoted, but you said earlier that I need to move quickly through Level 1 to Level 2. Surely there’s got to be more good news about getting promoted. Isn’t Level 1 good? Level 1 is really good. A lot of times. Well, first of all, the organization thinks enough of you to even give you that title, right? So there’s some credibility there and they see potential in you. Your authority is recognized by the organization. You’re being invited to grow as a leader. It’s a great place for you to start. I tell people all the time, this is a great place where you can experiment as a leader and the cost of making mistakes is not as great as you grow through that.

It’s a great starting place, as I talked about, it’s where you can really shape it. Who are you, who do you want to be? And just remember we all start there. And one thing I want to talk about real quick about Level 1 is that we all start there, but at times, you need to understand you’re on Level 1 with different people all the time. So as a sales leader in this particular situation, we’re talking about, I may be a different level leader with some of my sales team, but if I have a new sales member join my team, you need to understand that you are a Level 1 leader with them. So, you need to be aware of the positives of this because you’re going to have to draw from that all the time as you grow in your leadership.

So with all this good news about Level 1, why are you insisting that I move away from it? I’ve got to go to Level 2 and you said I need to earn that. It’s not given to me. I’ve got to earn Level 2. There must be some downside to Level 1 is there? There’s a lot of downside and I’ll talk about a couple of them real quick. You are going to be given responsibility, but you’re not going to have the respect of the people. And, so what you need to understand is yes, you have the responsibility, but, but how do I gain respect from my team? Our goal is going to be to get to where we have discretionary effort coming from them and that’s not going to happen at Level 1. We talked a lot about this being kind of the, the push power level, right? You’re having to push your team, your people to do a lot of things. And you want to grow beyond that.

One of the things that John says all the is that 80% of leaders stay at Level 1 and that’s a big, big problem because you’re not necessarily getting everything out of your team that you need to. I will also tell you that as a Level 1 leader, if you stay there, you’re probably gonna have high turnover and your retention is going to be extremely low, which at the end of the day is very costly for your team and the organization. Well, I always liked John’s quote where he says, “The only thing that a title really can buy you is time.” Either increase your influence or undermine it. So, I think I see where you’re going there. And it actually reminds me when I first got my first first line manager position, I had a team meeting. Everybody’s around the table and I told them what our strategy was going to be and where we were headed. And I noticed the eyes all shifting to a guy at the other end of the table. It didn’t occur to me that what was going on at that point was I may have had the title, but he had the influence and they were looking at his approval for what I was saying.

Fortunately, I kept my mouth shut and learned how to come alongside him and develop my influence as we went along. But, I don’t think I got it until I saw the Five Levels and how that really unfolded for me. I wonder, have you ever had an experience like that where you saw influence in title going up against each other?

Yeah. I’ll take it back to when I played college football. I was recruited as offensive line out of high school to play in college. And as you go through that recruiting process, you’re almost given a title and to some extent you almost begin to have a little bit of entitlement and think that you are a certain level of a player and you have certain level influence. I’ll never forget, early on in my freshman year, walking into the team of the offense line group and standing up saying a few words, trying to motivate them, trying to get them to go one direction and it looked like everybody was looking at me. They may have been been listening or they heard me, but they weren’t really listening and all of a sudden the true leader of the team got up and said, “Hey guys, let’s go right here. This is what we’re going to do.” And everybody in the locker room left and followed him. Even though I was a highly recruited offensive line, my words fell on deaf ears. So, it was obvious to me in that setting as sports who really had the true influence in that room.

While, I can see that, you know, getting that title is really a great compliment to leaders when you’re voted into that opportunity to lead. But, really what’s going to be determine your success or is it really the ability to grow your your influence. As we start to wrap this up, Chris, I was wonder if you could just walk us through. I’m looking at the best behaviors at Level 1 for leaders at Level 1 who want to move through Level 1 to Level 2. What do you see that really keeps them moving in a positive direction there?

Yeah, I think there’s a couple of things that are moving between those levels that you need to consider. The first one is you need to stop relying on your title to push people, right? You gotta begin to think about what is it going to take for me to connect, to relate to my team, to where I’m going to be able to move away from the push power thing.

The other thing is that you’ve got to understand why you can’t have that entitlement mindset, right? You got to strive for movement with the team. The story I shared a minute ago, I had a little bit of entitlement factor when I walked in as a full scholarship college athlete and what I didn’t understand is that there was already movement going on in that team and the leader who was very soft spoken had all the influence; he was the one that was truly moving the offensive line. And then finally, they need to leave their position and move toward the people, that’s really, really key. Don’t worry about your title, worry about your people. If we are going to say that people are most appreciable asset, then we need to understand that we need to invest in that. We need to learn them, learn about them, learn them and develop them and move towards them.

Well, that’s a great reminder and that Level 1 is where we start is not where we want to stay. Your influence will impact your reputation as a leader. It will actually determine the level of engagement that your team will exhibit. We all know that engagement really drives performance and results. So thank you very much for joining us, Chris. Thanks for the insights on Level 1.