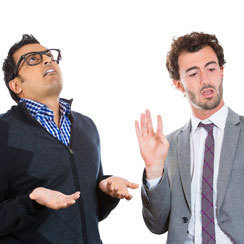 Dealing with difficult people can be stressful, but there’s room in any organization for every type of person. From the big-picture person to the detail-conscious, all can make a valid contribution. But sometimes a team member’s strength can be their weakness. Attention to detail can become fixation on the negative. And the voice of reason turns into the voice of discouragement. This is the problem with Critical Carl. He’s probably the most thorough and conscientious team member. He’s a great planner. But he seems to only see the negative. And he voices his criticisms to anyone who will listen. Let’s review how to understand, listen to, and lead Critical Carl.

What impact does Critical Carl have in your organization? His negative comments have the potential to discourage fellow team members and halt all forward momentum. By accepting at least some of his concerns as valid, and teaching him how he can – and can’t – share them, you might channel his attention to detail in a way that builds the team and contributes to every project.